This article is for developers who have used a debugger before (GUI or command line), thus you are familiar with debugging concepts/terminology like “attaching”, “breaking”, “continuing”, “stepping” etc. What we’ll focus on is how to get GDB to do that stuff - as well as how to use some of the cooler features of GDB (such as automated debugging).

There are a couple of ways to launch GDB. We’ll go through the most useful ones.

Once your process is running, you can force it to break where ever it is at, by hitting ctr + c when the gdb terminal is focused.

GDB is really only useful for debugging programs that were compiled with the -g flag. The -g flag tells the compiler to include information in the binary that maps lines of source code to area in binary.

Here are some GDB commands that control the execution of your process.

Remember, you can press ctr + c (while the GDB terminal window is focused) to break your process.

While your process is broken (or at some other time), you may want to have a look at some source code.

As soon as your process breaks, your “source code” pointer points to the line of code that your process was about to execute before it broke. If you type list, you will be shown 10 lines of source code around your “source code” pointer, then the pointer will get incremented. So if you type list again you’ll see the next 10 lines of code in the same file. The more you type list, the “further down” the file you go. Type list - (notice the -) to go back up 10 lines. So typing list will move you down the file while list - will move you up.

Note that after you view the source code for a particular function, your “source code” pointer now points here. So subsequent list and list - commands move you from here.

Similarly, you can use the info variables [regex] to get the fully scoped name of global/static variables that match a certain regular expression.

The easiest way to view your source as you step through a program is to enable TUI (Text User Interface) mode. To enable TUI mode, type layout next. Here is what you’ll see: 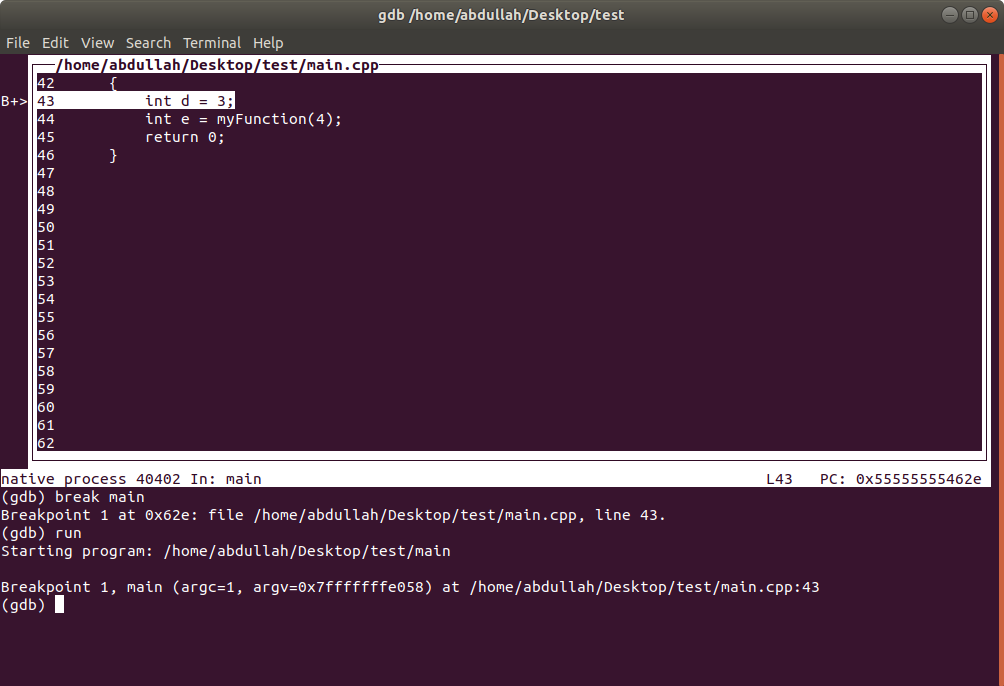 As you step through (using commands like next and step), you’ll see that the highlighted line of code will change.

Type tui disable to go back into terminal mode.

print <variable_name> to print the contents of a variable (of course, the variable must be in scope when this is called)

Here are some GDB commands for setting, viewing, enabling/disabling, and removing break points.

You can make break points conditional (i.e. they should only trigger when a certain condition is true). The syntax to creating a conditional break point is break <function_name> if <condition>. The <condition> is any valid C++ expression. If it evaluates to true or any non 0 number, the condition is fulfilled.

You can use convenience variables in conditions.

You can have gdb automatically execute a bunch of gdb commands when a particular break point (break point 2 in this case) hits. Here’s how to do it:

What we’re doing above:

To remove auto executed commands from a breakpoint (from break point 2 in this case) just do:

In other words, just put end without any specifying any commands.

This is an extremely useful feature, especially considering the fact that gdb commands support control flow statements (if/while), and you can set gdb convenience variables.

To break when the process throws a particular exception:

To break when the process catches an exception:

To break when the process receives a particular signal:

In the above case, we break the process when it receives SIGINT.

To break the process when it receives any signal:

Here are some other events you can catch:

Like break points, catch points can have conditions and automatically execute commands when hit. The syntax for these things is the same as for break points. Also, info breakpoints will show you the catch points you’ve placed as well.

You can have your process break when a certain piece of global/static data is read and/or written to. First, find the name of the data (variable). You can use the info variables [regex] command to search for variable names. Once you know the name of the variable of interest, just do watch <variable name>. This will place a “write” watchpoint, which means that whenever the variable is written to, your process will break.

info breakpoints will show watchpoints too.

You can tell gdb to automatically start executing gdb commands from a file once it launches.

First put your gdb commands in a file (the extension doesn’t matter).

This tells gdb to launch a particular executable (<executable_name>), and then start executing gdb commands from a particular file <my_command_file>.

GDB can store some information in variables as you are debugging. To store the number 5 in a variable called $my_var do set $my_var = 5. You can also set strings, e.g. set $my_string_var = "hello".

Remember the print command? You can use it to print the content of convenience variables as well, like so: print $my_var.

Notice that convenience variables start with $.

GDB has support for control flow constructs like if and while statements. These are useful because remember, you can write your gdb commands in a file and then tell gdb to execute the commands in that file.

Remember, you can use use convenience variables in conditions :).

You can execute any shell command by prepending it with !. For example, !clear will clear your terminal. When gdb gets a command prepended with !, it will just send it to the shell interpreter.

When you put the following together:

It doesn’t take a creative genius to instantly realize the immense amount of power here.

For example, what if I want to:

Here is a gdb script that will do all of that

With a little bit of ingenuity and creativity, you can do some very powerful stuff that can save you some serious manual debugging time!

Going Back in Time

GDB allows you to run your program backwards. To use this feature, after you attach gdb to a process, type record. This will make it so that gdb starts recording the execution of your program. By recording, it is able to play things backwards (effectively turning time back). Then use the command reverse-continue to make your process execute backwards until it hits a breakpoint (or a catchpoint, or a watchpoint).

When running gdb in interactive mode (i.e. you didn’t start it by telling it to execute commands from a command file), do quit then y to confirm.

If you are not in interactive mode, just quit is enough.