Part of a series on reinforcement learning:

Just a markov process with an associated “reward” at the end of each arrow!

Once you add rewards, you can begin to do some reinforcement learning. Once you cross an arrow, you get the reward at the end of that arrow.

The value function of the process tells you how “valuable” a particular state is in the long term. Meaning, that if you start in that state and let the markov reward process (MRP) rip (let-er riiiip!), how much total reward will you collect as you flow through the MRP? If you are in a high value state, then you are likely to end up collecting a lot of reward if you continue from this state.

There are several ways of finding the value function:

The equation in words:

The value of a state is the expected return if you start in that state.

These two slides from David Silver’s RL lectures show the matrix form of the equation: 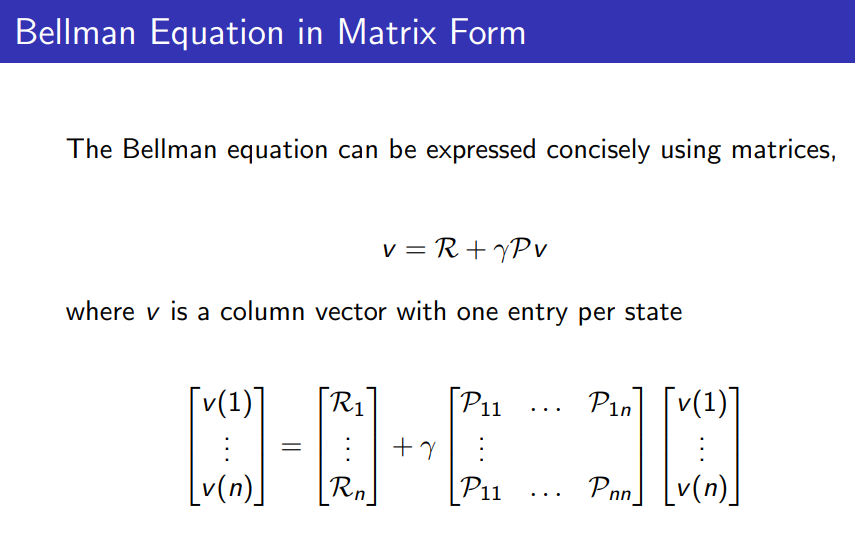 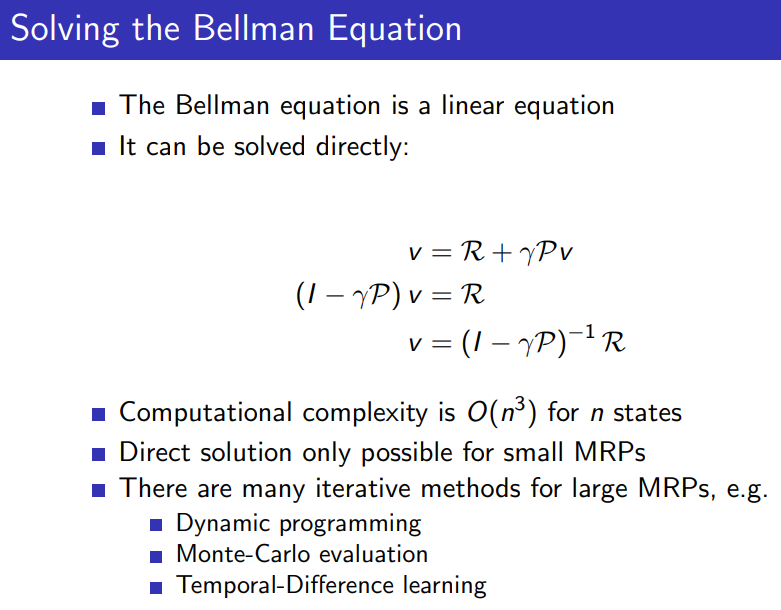 The basic idea: run a bunch of episodes through your markov reward process. For the episodes that you encounter your state of interest (the state whose value you’re interested in calculating), keep track of the total reward you collect after you see the state of interest (until the very end). So in other words, how much reward was accumulated after you saw your state of interest till the end. We’ll call this the “responsible reward”. Average a bunch of “responsible rewards” for your state (each seen at a different episode), which should give you an idea of the “value” of your state, on average, according to your observed episodes. If you run enough episodes, this should converge to the actual value of the state (as would be predicted by the bellman expectation equation, if you knew the dynamics).

The above method ignores subsequent visits to the same state (in the same episode). A little modification to the above monte-carlo method (called “every-visit monte-carlo”) states that you should not ignore subsequent visits, but that every time you visit your state of interest, you should take the “responsible reward” (from this state till the end) and average it into your average for the state so far.

You’ll usually see these algorithms working backwards (they start from the last state and work to the first), because it’s more efficient that way.

Monte-carlo methods require episodic tasks. TD Methods do not (and they are more efficient).

Basic idea: Don’t wait till the very end of the episode to update your guess of the value for the state.

Hell, you can even do several n’s, and then “weighted” average them (giving less and less weight to higher ns). This is called TD lambda. Lambda tells you how much to decay the weight for each n. A lambda of 0 is equivalent to TD n = 0, because it will give all higher ns a weight of 0. A lambda of 1 is equivalent to MC because it gives all ns equal weight. If you give all ns equal weight, you are basically doing MC.